My best friend and I spent the whole day yesterday baking, painting our nails, and watching Pride and Prejudice. And no, it was not the recent Keira Knightley version, but the wonderful 6-hour BBC version with Colin Firth. Oh, Colin Firth! Even when he looked like he had just sucked a particularly sour lemon (which was for about 90% the movie), he still looked handsome. (Also, after listening to 6 hours of Jane Austen's masterpiece, I'm afraid I picked up the manner of speaking. So please forgive me if I sound like Elizabeth Bennett.)

Anyways, I thought I would share a recipe we made quite spontaneously. We had just finished making a huge batch of pumpkin bread for a party that night, and I thought that it would be really great if we had a few brownies for ourselves (because when ladies get together, you know there is going to be chocolate at some point). But then I thought, what if we had brownies with wine in them? Red wine has such a lovely, rich flavor profile (at least, that's what the descriptions on the labels say) so it would be a nice addition to a simple brownie recipe.

Morgan was all for a little experimentation, so we began our "adventure in baking," as she called it. It was not without troubles, though, because due to an oversight on my part, we had used up all the eggs I had for the pumpkin bread, so we had to make do with a vegan eggless recipe I found on Allrecipes.com. Although the brownies turned out fine, I'm going to recommend using a different recipe because ours were too oily for my healthy sensibilities. 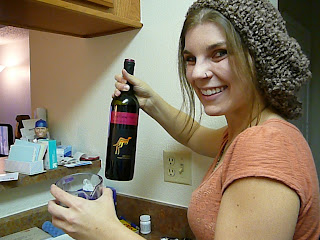 And in case you're wondering, yes, that is Morgan. And yes, that bobblehead is indeed staring creepily at the camera. Pudge sees all!

OK, back to seriousness. You will need cocoa powder, flour, sugar, vanilla, baking powder, salt, eggs, and red wine. My favorite rich red wine is the Yellowtail Pinot Noir. Not only is it the tastiest Pinot Noir I've had, it's also only $5 a bottle. Huzzah!

Mix all the dry ingredients together in a medium bowl, and all the wet ingredients in a separate bowl. 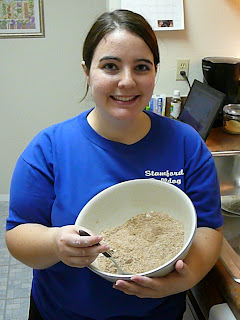 Next, combine all your ingredients in the same bowl and stir until well blended. And try to resist licking your spoon, because that wine makes the batter smell amazing. 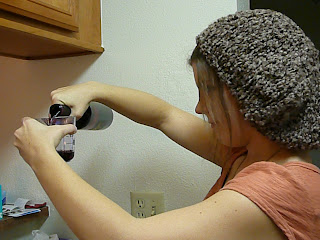 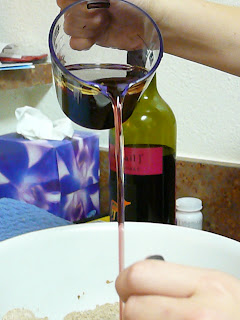 Pour into a greased baking pan and bake for 20-25 minutes. 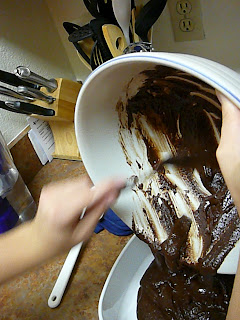 Now you can give in to that urge to lick the spoon. Believe me, that bowl barely needed any scrubbing by the time we were through with it. Mmmmm....brownie batter....

1/2 cup of your favorite red wine

I hope this recipe works better than the vegan one. It seemed very similar, so hopefully it will achieve similar results with less oil. And by the way? The brownies made my apartment smell absolutely wonderful. The wine and chocolate melded together to form this tantalizing aroma that still haunts the living room. 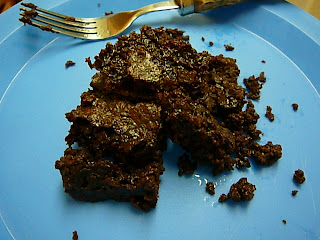