My First Flight and Business Trip

So apparently only hicks and small children have never flown on planes, because when I used to mention to people that I have never flown, they usually react with astonishment, confusion, and/or disbelief. Is it really so uncommon to drive everywhere? Seriously.

Anyways, the point of the previous paragraph is that my boss decided that since I had never flown on a plane, I needed to fly to company headquarters to have some training and schmoozing. Was I excited? You bet! Was I afraid of the TSA? Oh, yeah I was. I was so certain they would think I was suspicious and take me away to a small room to be searched. As if anyone would think I could be threatening!

Well, I got to the airport just fine and managed to find the security line with plenty of time to spare. I got into a random line and copied the actions of the lady in front of me. Everything was going fine until I went through the metal detector...and it went off! With no metal on my body, I was extremely confused why the detector would go off. I was trying to remove my Aggie ring and my earrings, and the TSA person was getting annoyed with my confusion, and the line was backing up behind me! AH!

Thankfully the next time I went through, nothing happened. Then I went to the end of the conveyor belt that brought the bins that had my purse and shoes and stuff past the metal detectors, and I guess I took too long to put everything back in order, because the other bins started piling up. And then they started falling off the belt! And the TSA people started coming over! AH!!! So I grabbed my stuff and ran away, hanging my head in shame and muttering, "I'm sorry! I'm sorry! I'm sorry!" Yep, security was terrifying.

The rest of my airport experience was pretty uneventful. I got on the right plane and everything! 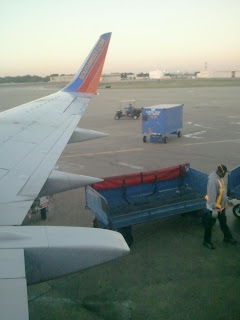 And then I started taking pictures of the ground crew. I think all the businesspeople on the flight with me rolled their eyes in tandem at my enthusiasm. Especially since we had gotten on the plane before the sun was up. 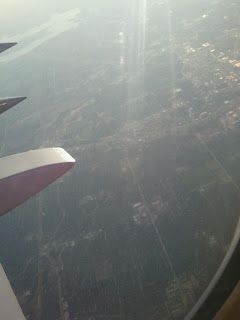 I said farewell to my home. And yes, my side was on the same side as the rising sun. That's why there's so few pictures of the flight up to Tulsa. 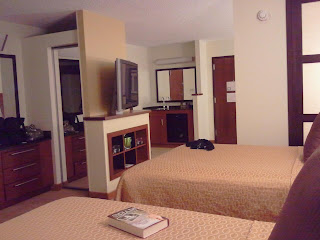 Well, I made it to Tulsa just fine and got to my hotel room. Boy, was I surprised! I'm used to Motel 6 when I travel. This was SOOOO nice! See that TV? Yeah, it was HUGE. I spent my evening curled up on the squishy couch under a nice warm blanket watching Blue Ocean. Oh yeah! I even got to see a lovely sunset outside my window. 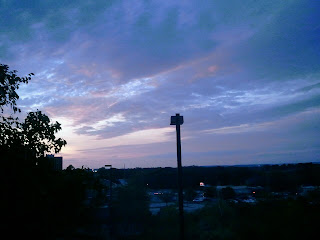 About Tulsa: I like it! It's super pretty! There's so many trees, and cute little hills, and even some cute little mini-mountains! (Tulsa people call them Turkey Mountains, but they are actually very nice. Even if they are rather small.) I think I amused my coworkers at HQ, because I kept saying how "adorable" Tulsa is. The part of town I was in was rather quaint, with nice little buildings that remind me of New England architectural styles, and did I mention the trees? They were already changing color. Yes, I was very excited about the plethora of trees in the city. Can you tell I grew up in West Texas? 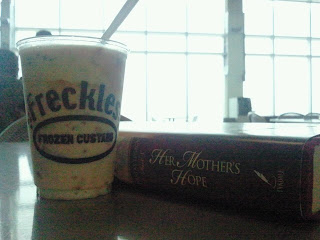 My experience in Tulsa International Airport was much better than my original departure! I went right through security with no mishaps or annoyed TSA people, and had plenty of time to eat some delicious frozen custard and enjoy the new Francine Rivers book. (By the way, it is really good!) 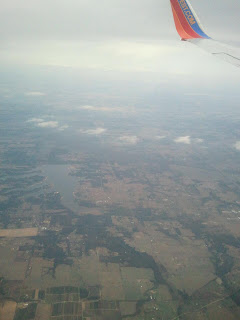 Well, it was rather overcast the day I left Tulsa, so I thought it would be a dull plane ride back. Looks really boring, right? You can barely see the ground for the rain.

You can imagine my surprise when all of the sudden the view outside my window was completely white! We were going into the clouds, so I couldn't see anything at all. And then, all of a sudden... 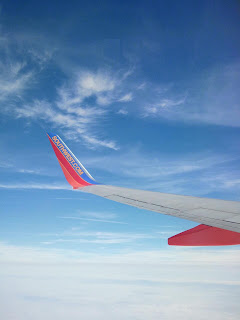 BOOM!! We broke through the clouds, and there was the most beautiful blue sky above them! It seems kind of silly, but I guess I just thought rainclouds went high enough into the atmosphere that we would be stuck in them the whole time. Boy, was I ever wrong! 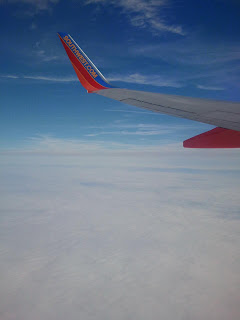